An important place in the modern structure of the pharmaceutical market belongs to drugs: biotechnological products of various origins. These are drugs that are essential to pa-tients’ lives, such as recombinant insulins, interferons, interleukines, erythropoietins, and so on. At the same time, statistical data on introducing these drugs on themarket, as well as a number of low-molecular drugs, demonstrate thatthey are insignificantly more effective than a placebo. For example, the use of beta-interferon (in the treatment of disseminated sclerosis) exceeds the placebo in effectiveness by only 8 % (placebo: 30%;beta-interferon: 38%). The situation is al-most the same for low-molecular drugs such as antihypertensives. The effectiveness of amlodi-pin at the third stage of clinical tests was only 22% higher than that of the placebo (amlodipin: 52%; placebo: 30%). The reasons that a drug might turn out to be ineffective or of little effect for 48% of patients have not yet been determined. The most difficult to explain is the ineffectiveness of drugs whose acceptors are cell receptors that have long been the subjects of study: namely, adreno-, cholino-, and histamine receptors. It remains a mystery why one and the same drug can be completely ineffective for one group of patience while remaining effective for another group. Due to this little-studied peculiarity of the human organism, the majority of antihypertensive drugs are taken in combination. It is especially necessary to combine at least three drugs with different mechanisms of action but the same final result: for example, antihypertensive or cytos-tatic. In the latter case, the differences between various kinds of tumors are especially marked, not only in sensitivity, but also in the individual peculiarities of a specific tumor and host organ-ism. Even polychemotherapy often turns out to be ineffective in the treatment of patients with cancer. The FDA’s depressing statistics on the third

stage of clinical tests of drugs demonstrate the low effectiveness of practically all medicinal drugs available on the pharmaceutical market. The average effectiveness of the strongest drug (morphine) is 75%. In other cases, we observe either intolerance and toxic effects or an

opposite reaction. Even in narcotic drug applications, only 60% of the people who took them are observed to experience the classical effects. The other group of people who took, for example, cocaine, suffered a severe headache and dizziness with-out any signs of anesthesia. This

kind of divergence of effects may be caused by polymorphism of the receptor system within human population. Earlier, the structure of receptors was consi-dered to be absolutely conservative and invariable for a single, or sometimes several, animal species. At present, more

and more scientists are tending to believe that receptors differ in much the same way as do human faces, even within a single species. These differences are caused not only and not so much by the change of the primary amino acid sequence of receptors’ protein base as by

conformation changes of secondary and tertiary structures. Although they are formal-ly similar in primary structure and molecular weight, different people’s receptors are actually different combinations of protein isoforms. This is especially apparent in the example of major

histocompatibility complex (MHC) antigen isoform combination. The selection of this complex is vitally important to organ transplantation processes. If thousands of variants and combinations exist for the MHC system, why should the structures of an organism’s other receptors be

con-servative within a species? Most likely, similarly to MHC antigens, the tertiary structures of the majority of cell receptors differ significantly by isoform profile within a population. This hypothesis provides a good explanation for drugs’ low levels of

effectiveness. A conservative structure of a classical drug (like one“key”) cannot match a specific receptor (“many different, though similar, locks”) in all individuals of one species equally and withequal affinity.

Illustration
1. Instead of one “key” for one “lock” (the principle of a classic drug with a conservative structure), we propose a selection of “skeleton keys”: a group of many similar molecules that “open” many “locks” and adapt to the target. This
facilitates a practically 100% effectiveness rate and a maximally wide spectrum of drug activity.
In order to increase drug effectiveness, it is necessary to change the concept of drug
development and approaches to this process. For example, docking, one of the most effective methods of modern drug design, uses a conservative sequence of one receptor. Sometimes target conformations are used in different solvents with further overlay of conformations.
It will never be possible to obtain infinitely many receptors and find ONE inhibitor substance for all conformations. One of nature’s successful solutions is immunoglobulin system evolution, which protects higher organisms from external aggressive factors, such as viruses,
microorganisms, and fungi. Practically the same immunoglobulin base (Fcareas and heavy chains) with a large number of different variants on FAB – fragments being specific to their targets – is quite a successful solution. In this situation, affinity to targets
(the level of correspondence of the “hand” to the “glove”) may vary from 5% of IgM to 95% of IgG. 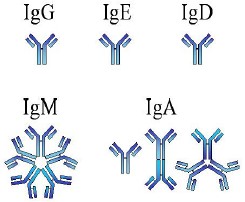 Illustration
2. There are five basic forms of immunoglobulins in order of their synthesis and strengthening of affinity (relationship) and their specificity to targets (the ability to selectively find and interact with a target): IgM; IgA; IgE;
IgD;IgG
Sometimes one target antigen may cause the generation of several hundred thousand variants of immunoglobulins with different monoclonal specificity for different epitopes. This kind of polymorphism justifies itself: the majority of the population survives infectious diseases. In many cases reconvalescent donor immunoglobulins are still the only effective means of treating many diseases, such as SARS and Marburg fever. To provide the maximum affinity for the maximum number of people, it is necessary to have a mixture of millions of molecules that are very similar but still different from each other in one vial. In this case we obtain not one “key,” but a whole bunch of keys. At least one “key” from this
“bunch” will match a specific patient and his/her original receptor. If it is impracticable under modern conditions to synthesize a specific inhibitor for a specific patient, then the only option is to produce millions of inhibitor isoforms in one mole of substance. In our opinion, one of the most reasonable methods of solving the problem of low drug effectiveness is to obtain precision partially chemically modified recombinant biotechnological preparations: biopolymers (proteins, polysaccharides, polynucleotides, tannins, self-organized structures/phospholipids, etc.). The usage of this technology will bring pharmaceutical science to a level of intensive development, make molecular modeling methods much simpler, and increase the probability of a practical means of introducing therapeutic drugs. The effectiveness of this design method (drag design) for medications is confirmed by the effectiveness of the antiviral veterinary drug SPRO-2018, which was designed and implemented on the basis of self-organizing quasi-life systems. This drug is effective in the treatment of nearly allexisting viral infections in animals, even at very severe stages of the disease, with quick therapeutic manifestation. This drug has received permission for production and application as a veterinary medicine. A second drug, FRNA-211, is a self-organizing quasi-life system based on modified RNA. It has the properties of microRNA and has shown significant cytostatic properties on more than 50 cell cultures and in three animal models. Research in the area of substituting dynamic medications for conservative structures continues.